... NEWSFLASH ... john meader, astroknowledgeperson most extraordinaire, examined my snapshot of china lake and determined that, quite accidentally, i freely admit, i'd managed to also capture the image of comet lovejoy c/2014 q2 ... 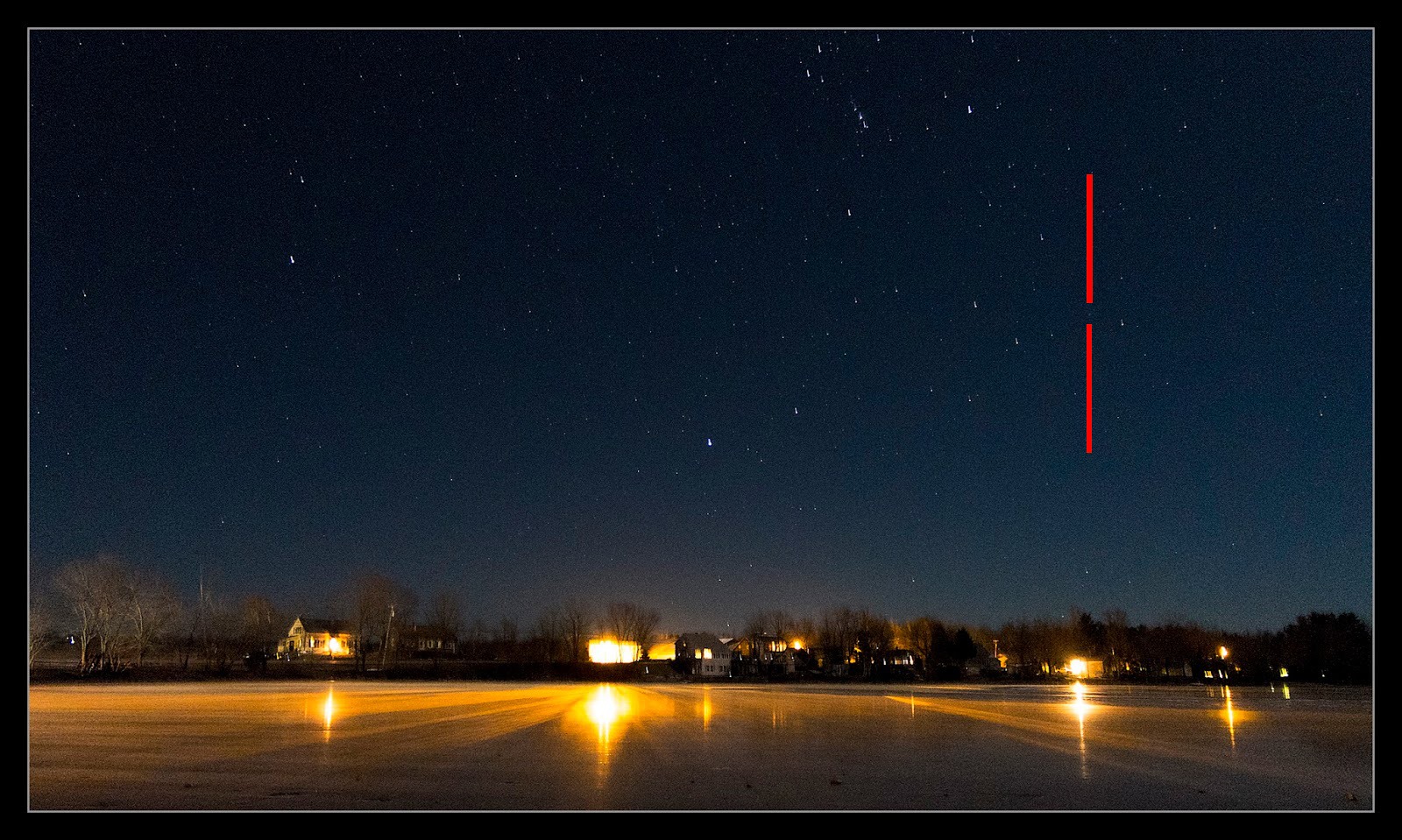 ... how exciting, that i've taken a picture of an object that may be a visitor from the mysterious region at the very edge of our solar system known as the oort cloud ... the last time lovejoy passed, our species was busy surviving an ice sheet that had enveloped most of the northern hemisphere ... i have to wonder, in the darkness of an arctic winter, did some nomadic fur-clad hunter pause for a moment to look up, notice this strange new light in the sky, and, just perhaps, develop thoughts he'd neither the language nor conceptual framework to articulate ... a fuzzy "what—why" that would slowly develop into the seed from which all human civilization would eventually grow ... ??? ...

... several months ago the freedom, new hampshire, public library invited me to display my photographs ... as much as i enjoy taking pictures, i always appreciate it more as a shared activity, so i invited john and chad join me ... on new year's day chad picked us up and we drove over to hang our work ... 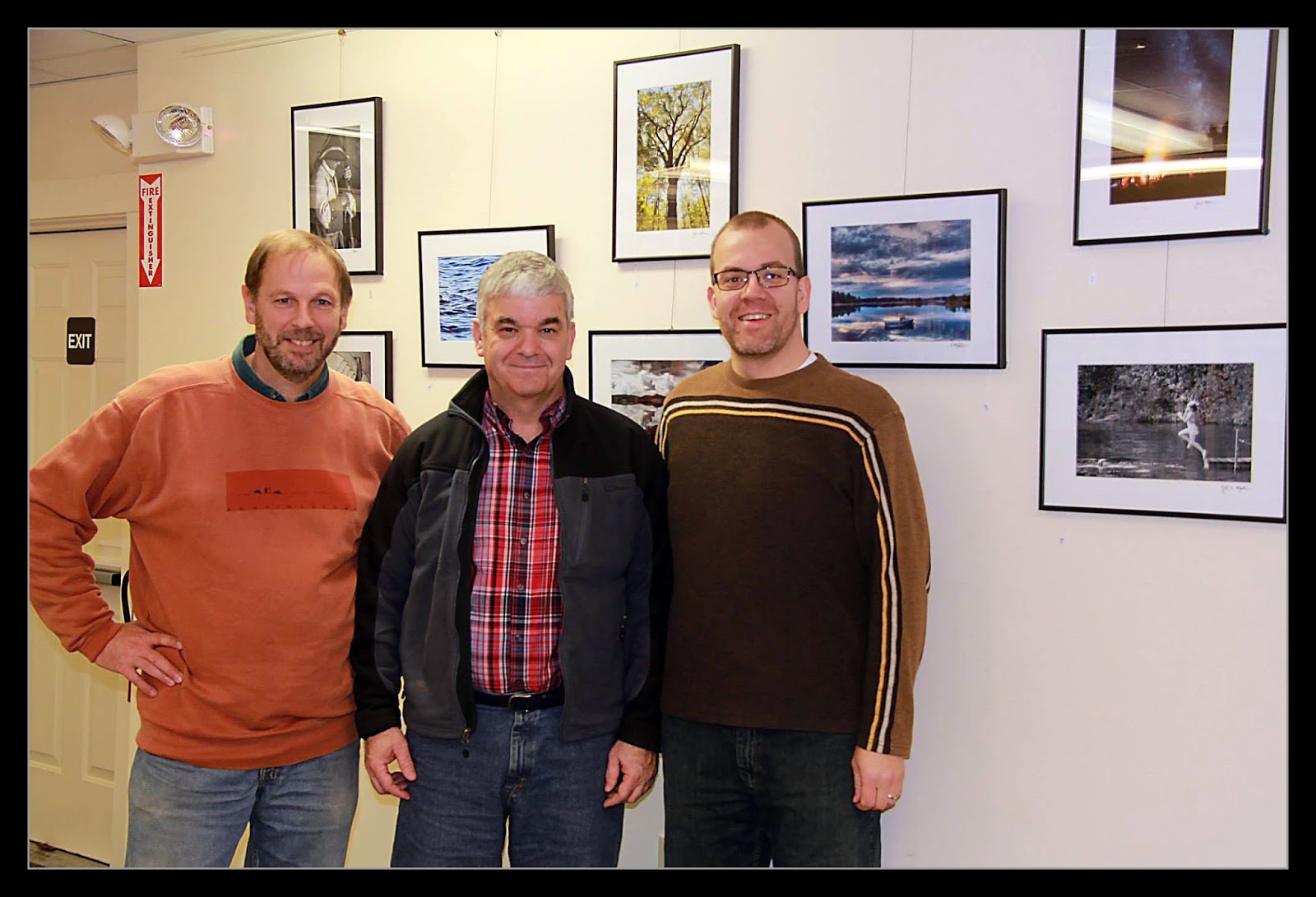 ... if the chance arises, or, even better, if you're willing to set the dice as you like, please, take a little wanderabout over to freedom to share our vision ...

Of my earliest memories are of driving out to the military base with my Pa and spending an evening in the Photo Lab’s darkroom. He would perch me atop the little wooden stool in front of the fixing bath, and for several hours it would be my responsibility to gently stir the exact amount of time, then very carefully use the giant tongs to move the prints to the first washing tray. Staring at the exposed paper in the developer, watching with awe as an image slowly emerged, I became forever cast in photography’s magical spell. Much later in life, he would hand me one of his older cameras, offer up a box of outdated color slide film, and say to me, “Go, see, find your own pictures.” It was quite some time before I began to understand the relationship between f-stop, shutter speed, and ASA. After that came focus, depth of field and circle of confusion, the Zone System, exposure latitude, reciprocity failure, and the fundamental "rule of thirds." It was even more time before I came to accept that I was never going to stop learning.
What happens when I take pictures? I'm not sure. Closest description of my feelings that I've ever heard was my friend Carl, who said, "Pat, you see things that most of us merely look at ... you stop and notice what most of us pass by." Whatever it is, I'm always pleased to think there are others who enjoy sharing my vision.
Patrick Groleau
www.patrickgroleau.com

I picked up my first camera and seriously started taking photographs in 1978 on a family trip across country. Trying to capture something more than simply a scene quickly became the aim of every shot in every national park we visited, though most shots never reached that lofty goal, it became the reason to take pictures.
Over the years with a variety of cameras, I have attempted to place my camera in the right spots at the right times to capture the essence of the moment at hand. It’s not easy, but it’s rewarding when you occasionally hit the mark. In the end, making a photo that captures what you’re after is simply the icing on a delicious cake. The greatest value in this endeavor is the process of learning to see, learning to anticipate, and putting yourself in the way of beauty. I still love the national parks, but I’ve learned you don’t need to go to Yellowstone to get a great photo, you just need to open your eyes to what’s all around you where ever you are. It takes practice and that’s the joy of photography.
John T. Meader
http://www.northern-stars.com

I throw my camera and tripod in my car, make sure I’ve my little flashlight, and off I go to Schoodic Point or Northwest Harbor or one of dozens of my other favorite places along the coast of Maine. It is not unusual that at three in the morning in almost total blackness I am sitting alone along the edge of a heard but yet-to-be seen sea. Gradually, my eyes become accustomed to the starlight, and there is a period of time I am like a night creature, viewing the world in barely discernible shades of gray with only the barest of a hint of color in the breaking surf’s phosphorescence glow. I wait ... I wait ... and then, no matter how I prepare myself, always a moment that catches me by surprise, a suddenly contrasted distant horizon is the sun’s announcement to me, “Hello, Chad. Get ready, because for you, most especially for you, today I might just happen to have something spectacular in mind.” Later, I will bring to my sweet wife and children, and to my friends and family, my pictures. I joy in the sharing.
Chad Tracy
http://fineartamerica.com/profiles/chad-tracy.html

“Above all, I craved to seize the whole essence, in the confines of one single photograph, of some situation that was in the process of unrolling itself before my eyes.”
HENRI CARTIER-BRESSEN

THE STARS ARE BORN

... back of his ancient subaru loaded with equipment, after a stop to collect roger john pulled up at my front door so i could join in a little mid-winter fun ... driving south towards china lake i played with my new fujifilm x-e1 ... 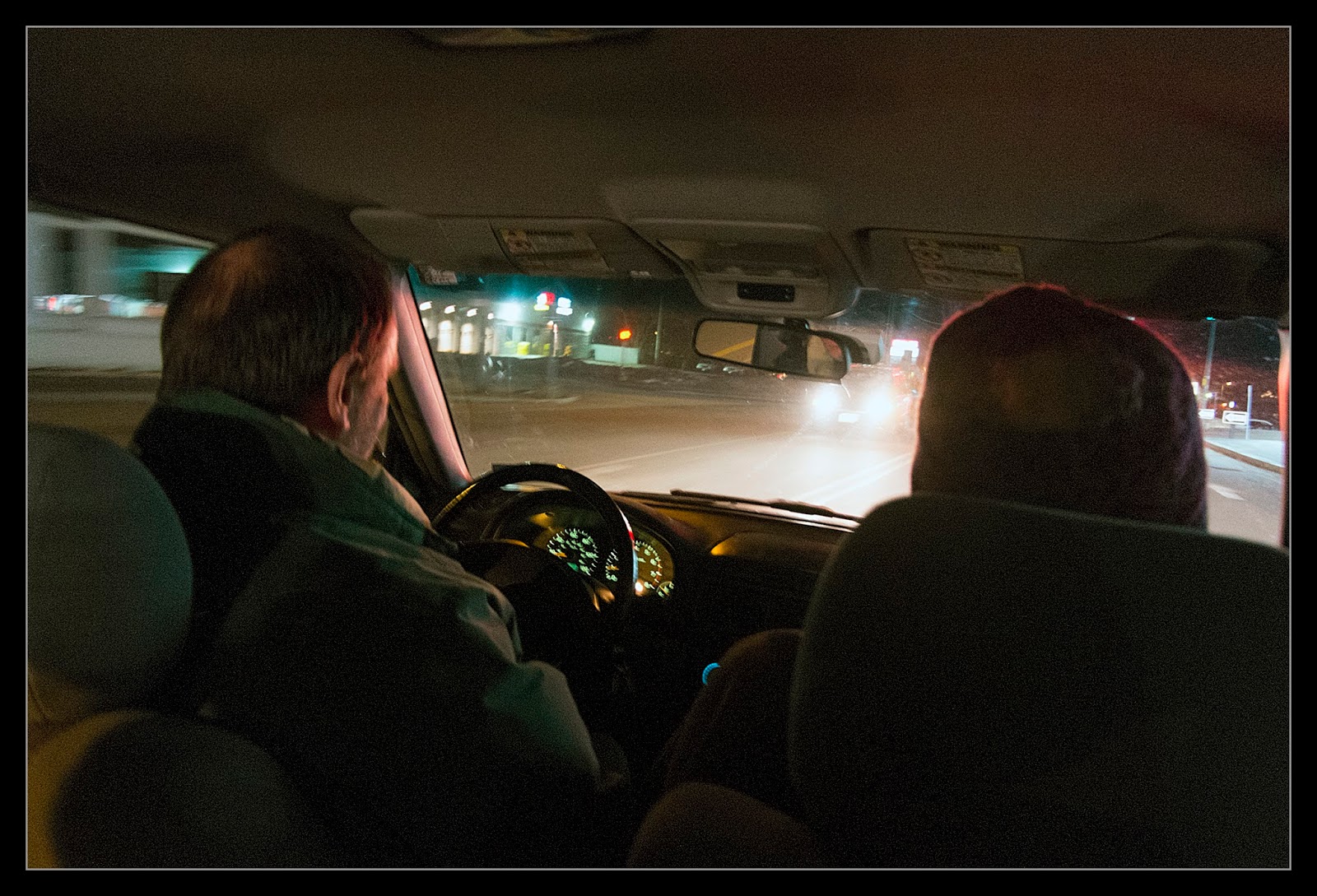 ... we parked the car at the shore of the frozen-smooth surface of the lake ... the temperature was 16°f and dropping, with the brisk breeze bringing to exposed skin an effective chill close to 0°f (for my non-anglocentric friends and fans, that's -17°c) ... 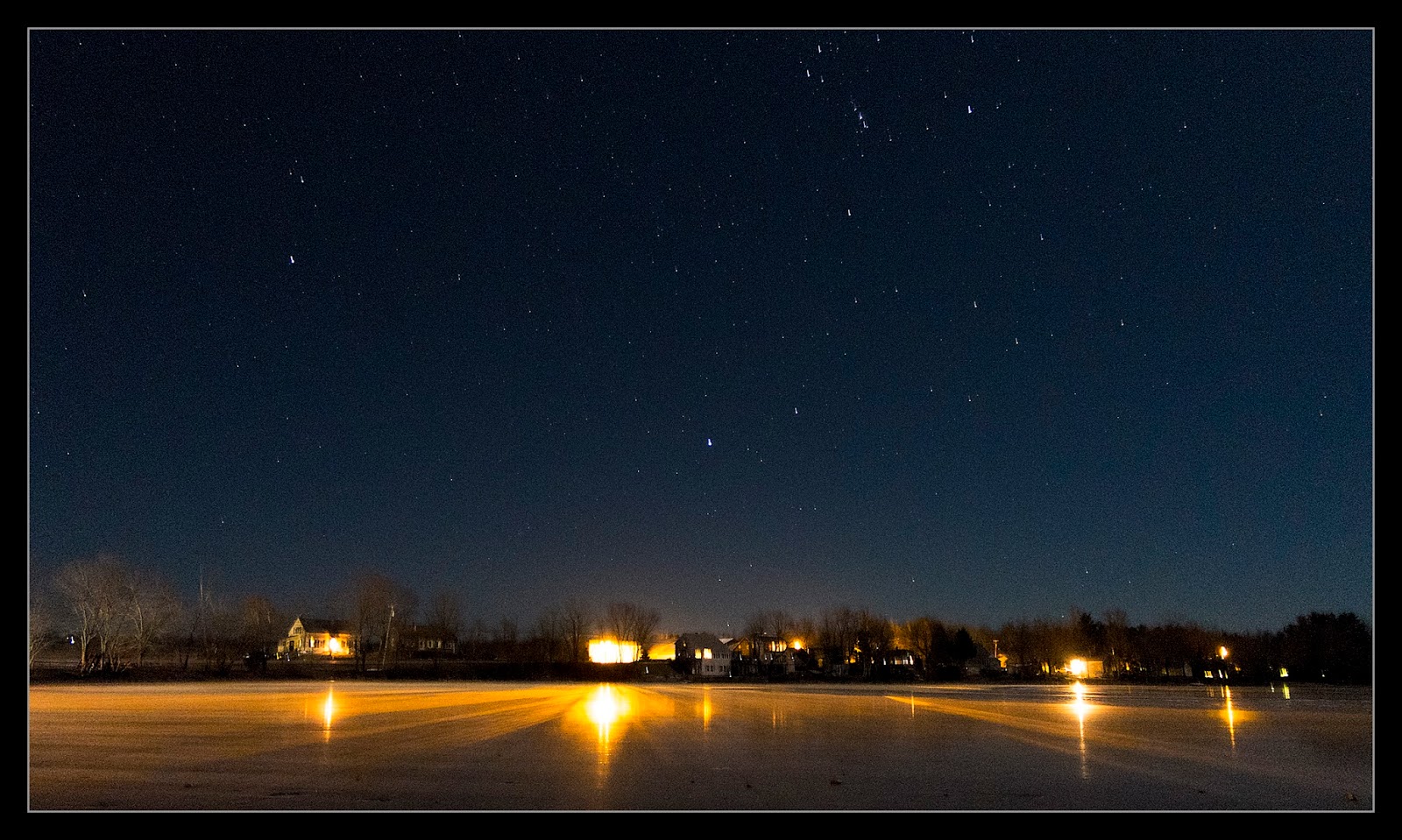 ... while john prepared the telescope and roger surmised the smoking lamp was lit, i played some more with my little camera, then enjoyed skipping stones across the surface of the ice ... since i was a small child i've been intrigued by the strange sound that is produced, as if a huge piece of thin sheet metal was being warped back and forth in the wind ... 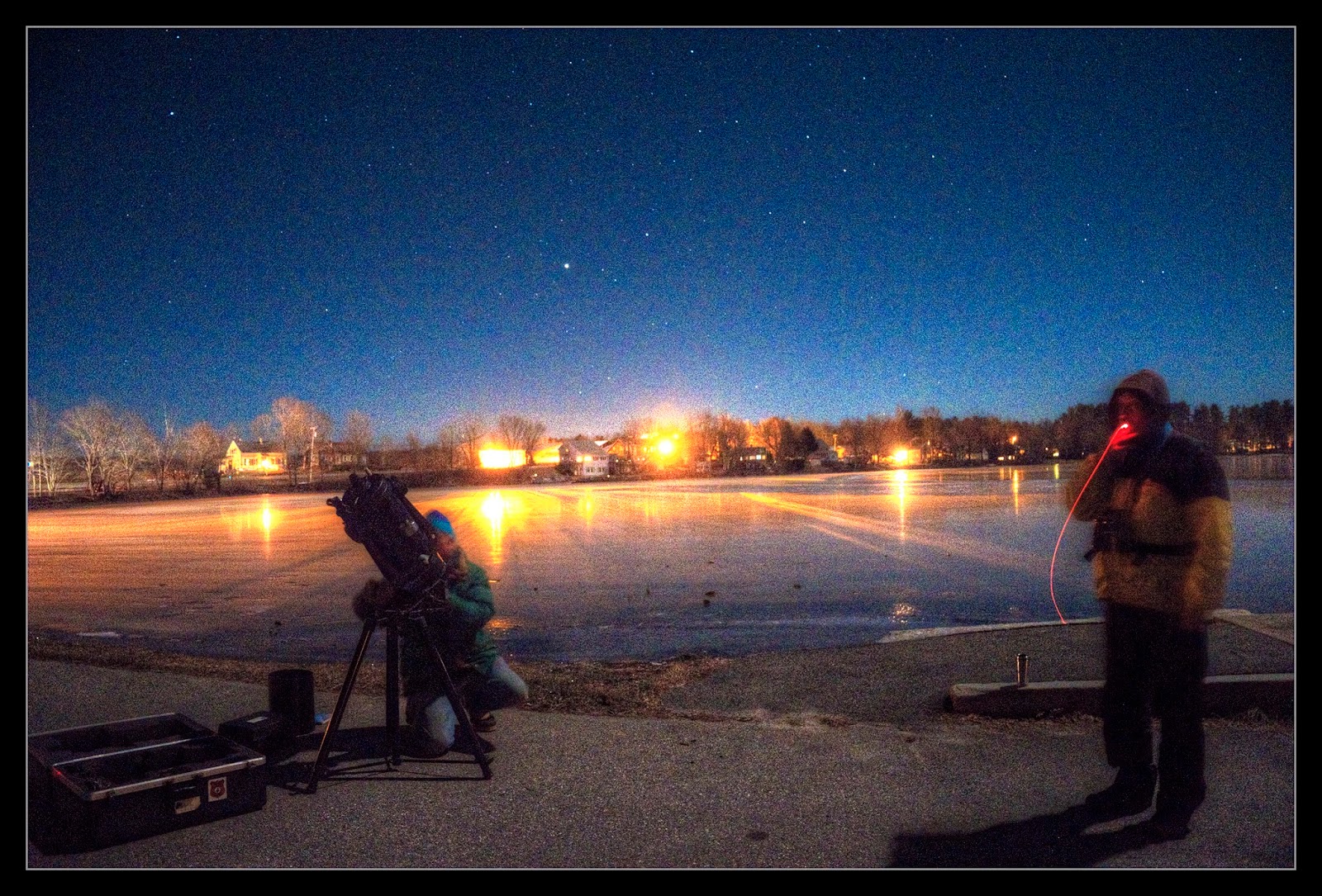 ... jupiter, currently 365,366,259 miles away ... to put that in perspective, at this position in its orbit jupiter is 1,532 times further from the earth than is the moon ... at 186,000 miles per second it takes sunlight reflected off the upper atmosphere of jupiter over 1/2-hour to reach our eyes ... never before seen by humans until galileo first observed them in 1610,  the four moons brought into view by his improved telescope, io, europe, ganymede, and callisto, are in his honor called "the galilean moons" ... more than simply expanding our perception of the universe, galileo's discovery provided evidence that was eventually to topple the ptolemaic view of existence ... no longer constrained by a heliocentric model that put our sun, and thus ourselves, at the center of the universe, galileo forced us to take the huge leap towards understanding exactly how vast and complex is all creation ... 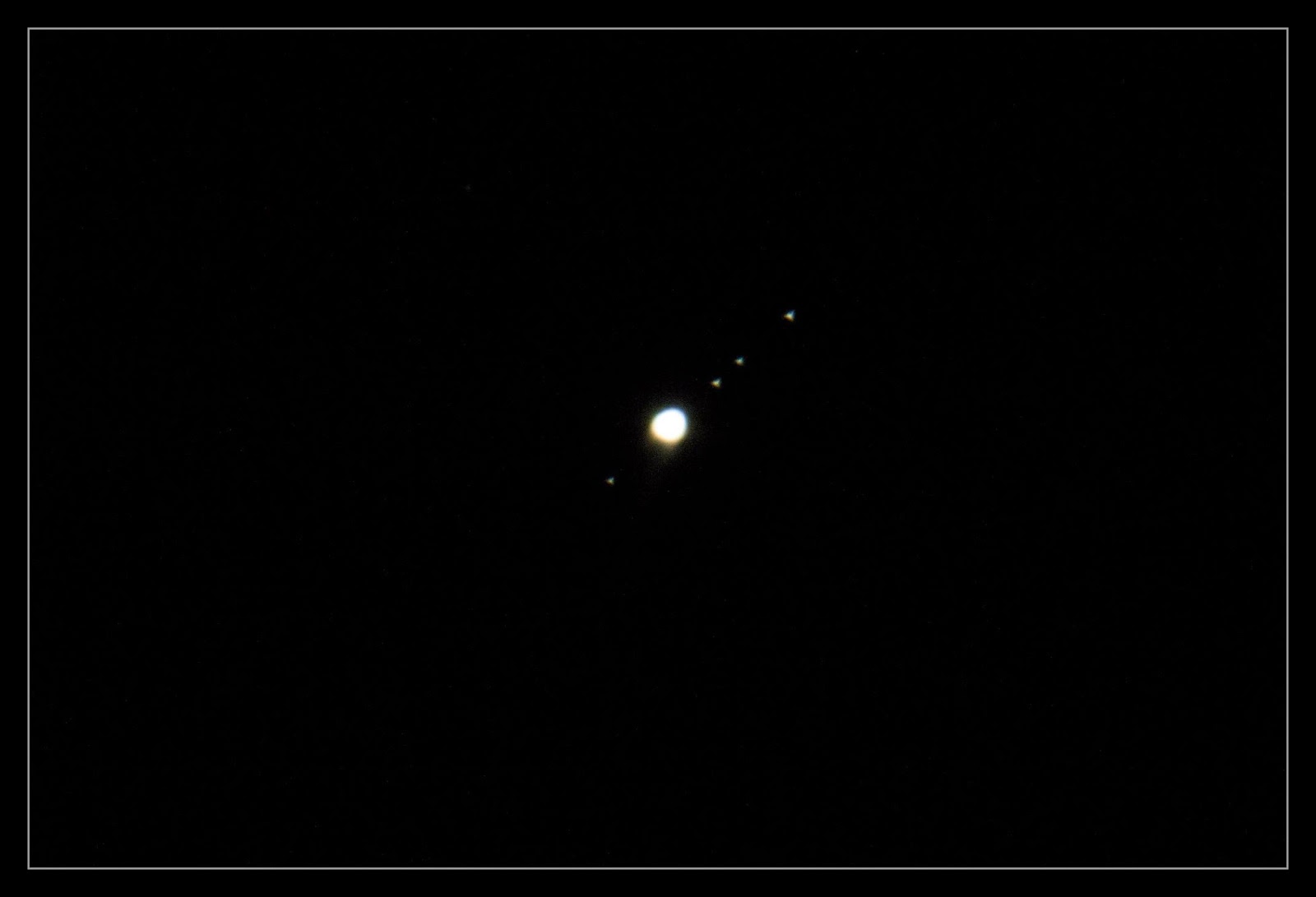 ... fingers almost frozen, john realigned his telescope to aim at a fuzzily glowing minuscule smudge in the sky just above the eastern horizon ... so distant that it has taken its light over 1,350 years to reach the earth, this is the orion nebula ... a monstrously huge cloud of gas and plasma, thousands of times larger than our solar system, this is a place where stars are being born ... with the exception of perhaps a single stray plutonium atom (provided courtesy one of the countries which open-air tested nuclear weapons, or, possibly brought to our lungs by the wind from a small city either in russia, on the coast of japan, or in pennsylvania), billions and billions of years ago each and every one of the atoms in your body and mine were once contained in such a cosmically huge glowing mass ... i repeat:

... billions and billions of years ago each and every one of the atoms in your body and mine were once contained in such a cosmically huge glowing mass ... 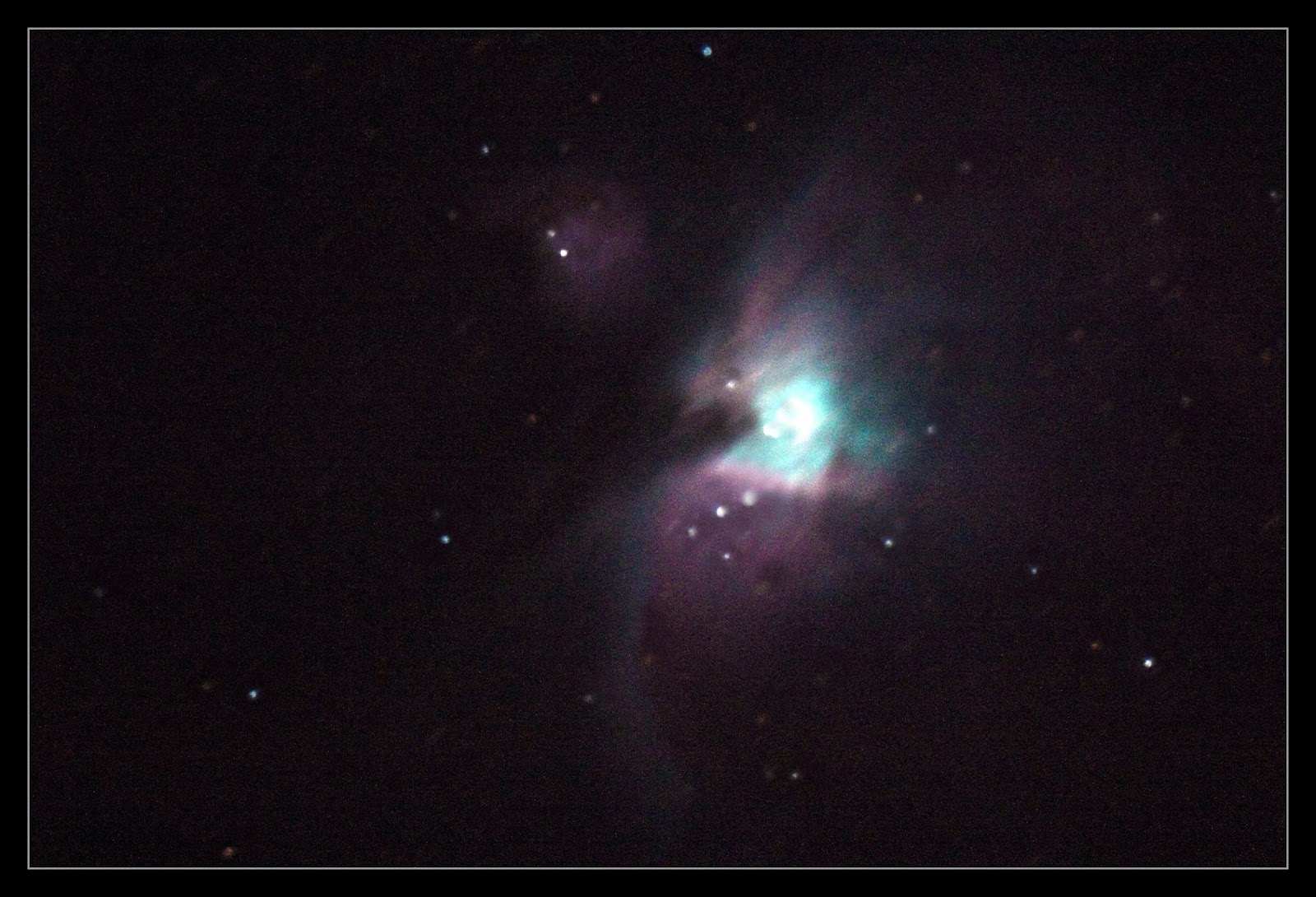 ... it was cold, so cold john had a difficult time aligning the telescope properly, and his fingers became numb to the degree that i had to take over the delicate task of focussing the lens ... for sure, the hubbell telescope produces much better images than this, but ...

... but, unlike that most marvelous mechanism orbiting high above us, in the first person we could look through the eyepiece of john's glass, so that our retinas were softly caressed directly by the birthlight of stars ... after, still shivering from the cold as we treated ourselves to convenience store coffee, we continued to marvel at the wonder of it all ...

a lake, frozen over
great cracking noises as the ice expanded in frigid air
music falsetto, stones childishly skipped across the hardened surface
glowing golden porch lights along the faraway shore
car and truck headlamp beams, silent arcing the darkened horizon
purr-purr-purring, our car loyally promising a reward of warmth
and
far, far, far
so very far away
orion
close
for us to reach out and touch
beginning
beginning us again 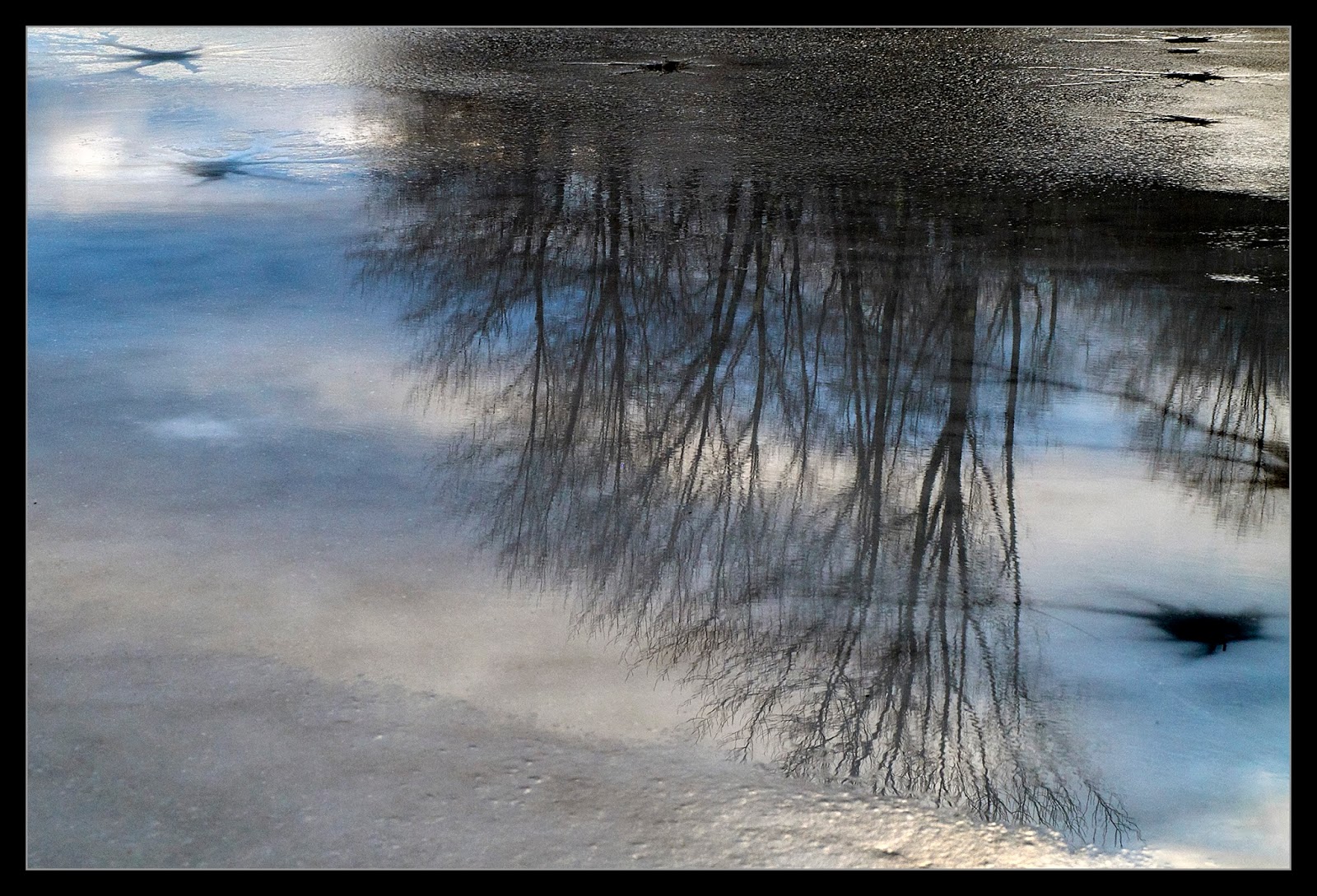 turning suddenly,
i saw you looking my way,
peering through me,
as if i were a mirror
and you a young girl
preparing for her first dance ...
J.PRICE
Newer Posts Older Posts Home
Subscribe to: Posts (Atom)