"THANKS FOR THE MEMORIES"

... having used pa's clunky old argus and little jewel-like wittnauer festival, i was still surprised when he said to me, "you can take my petri up to the u.s.o. show" ... me—allowed to leave the house with his precious single-lens-reflex camera—i was breathless ... 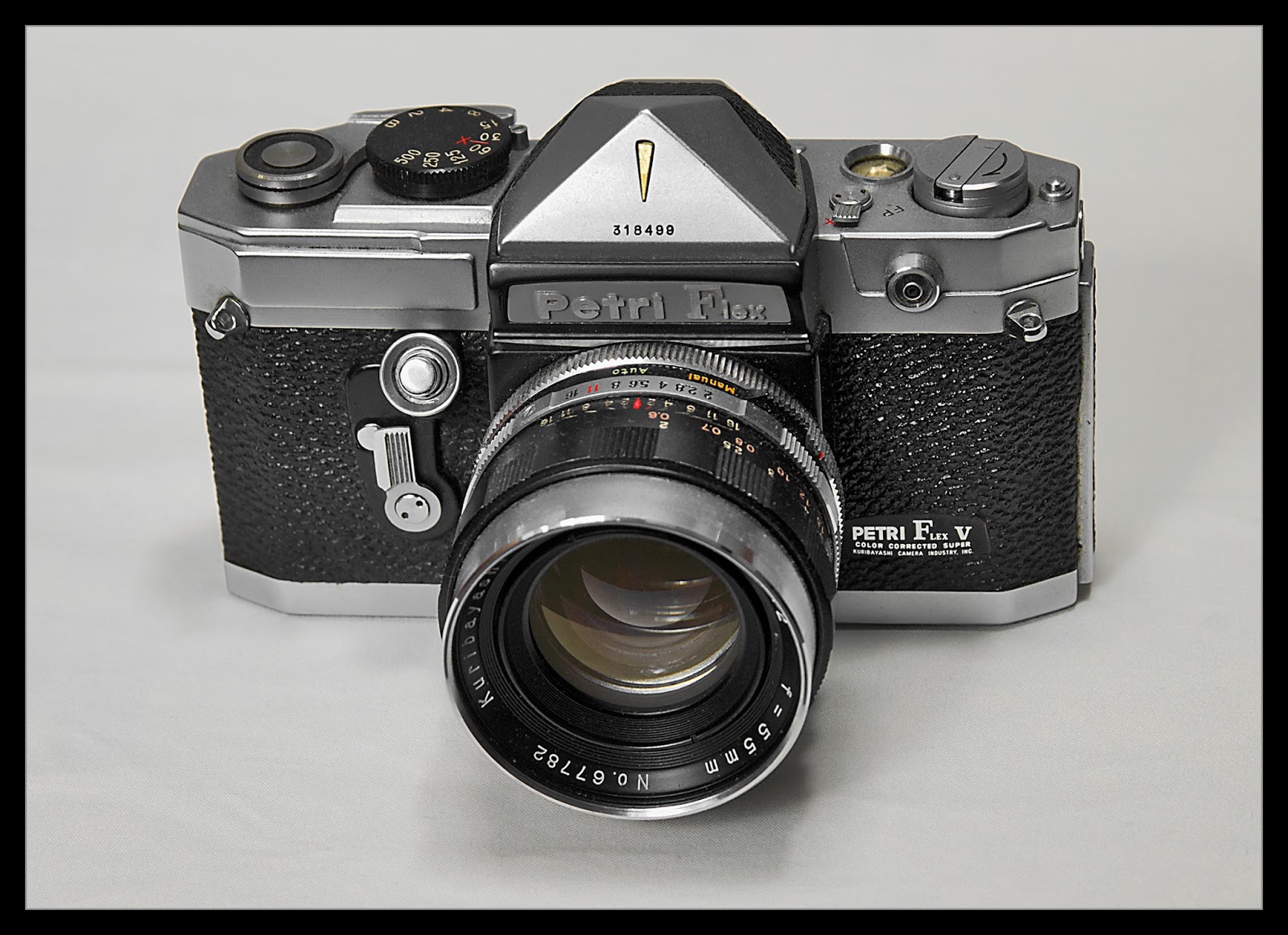 ... after a quick lesson in the use of the clip-on light meter (not shown in the photograph), i was off to one of island life's isolation breakers, the military's annual "bob hope u.s.o." show ... down at the football field where they staged the event, i snuck under the ropes and worked my way into the press section ... after a few minutes one of the military police (with whom i was quite familiar professionally, i must admit) came over to bust me ... as he started to grab my shirt to haul me away, one of the navy photographers turned to him and snarled, "leave the kid alone, he's with me" ... the sky cop started to respond, but after a quick glance at the rows of ribbons on the navy guy's chest he shut his mouth and wandered away ... i glanced at the little colored decorations, gulped, and very, very respectfully said, "thanks, chief" ... "no problem, kid, just make sure you look like you know what you're doing, okay" ... here, with my first use of a "modern" camera, a photograph of bob hope ... 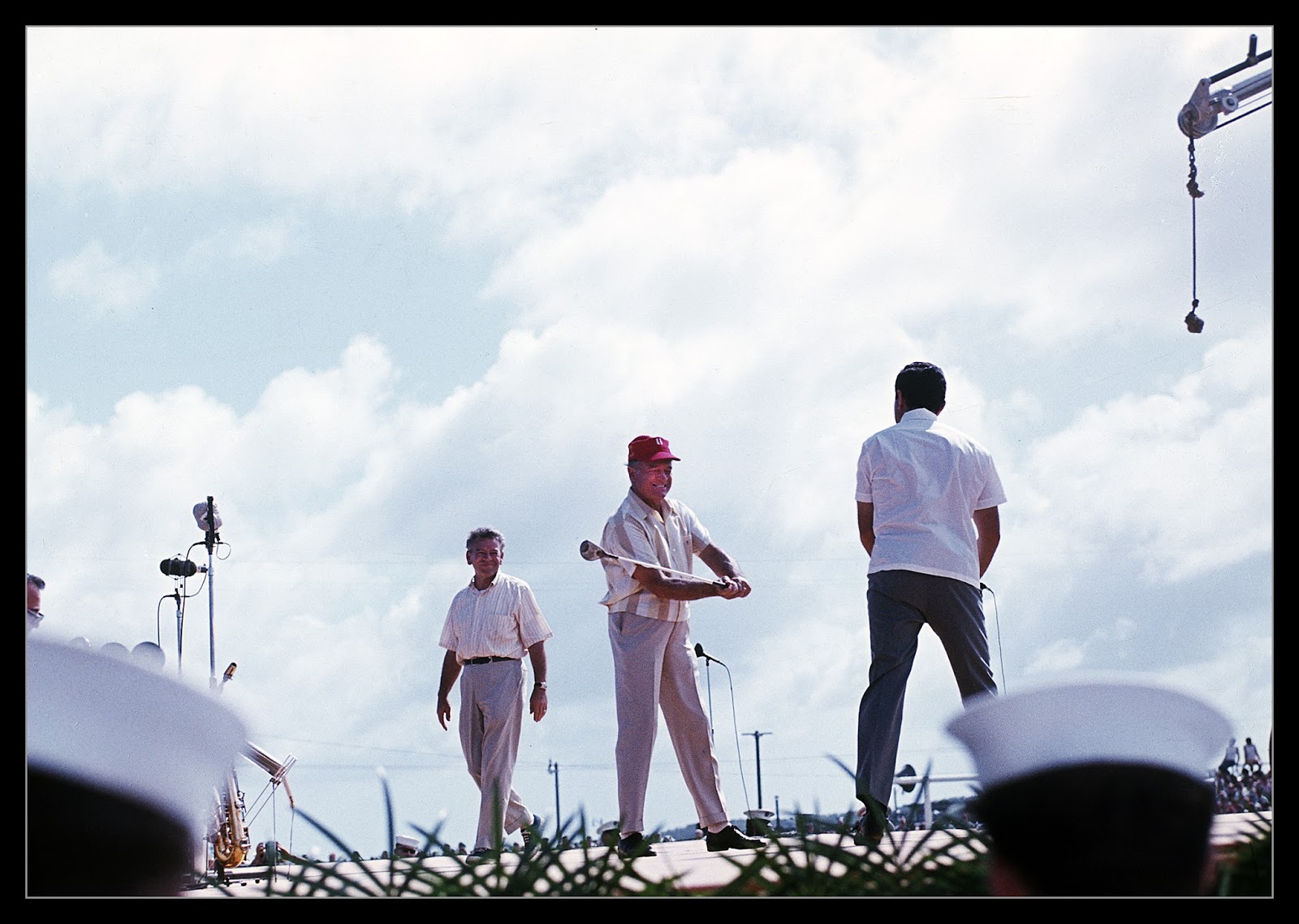 ... i loved his movies, but hope on stage i never found all that entertaining ... after the show, however, my friends and i got to hang out with ann margaret, whom i found to be one of the absolutely nicest people i've ever met ... as for the navy photographer, well, that was a most important photography lesson, one i've quite often been most appreciative he took the time to teach ...

... and, how odd, that almost a half-century later my current nikons are, in basic form and function, still pretty much identical to that now ancient petri ...

... bob hope would alter the lyrics of this song to bring to either laughter or tears, or both, the particular audience he was entertaining ...

ADDIE AND PEMAQUID GET AQUAINTED

... since she had expressed an interest in learning photography, for a christmas present eric bought my olympus e-p1 for his daughter ... after one cancellation due to illness and another due to a rather nasty spring snowstorm, eric and addie and i finally met up for her first "lesson" ... after stopping for lunch, we headed down through bristol to visit pemaquid point ... it was a beautiful day, made more so by the sight of addie excitedly scampering around exploring the primeval strata ... 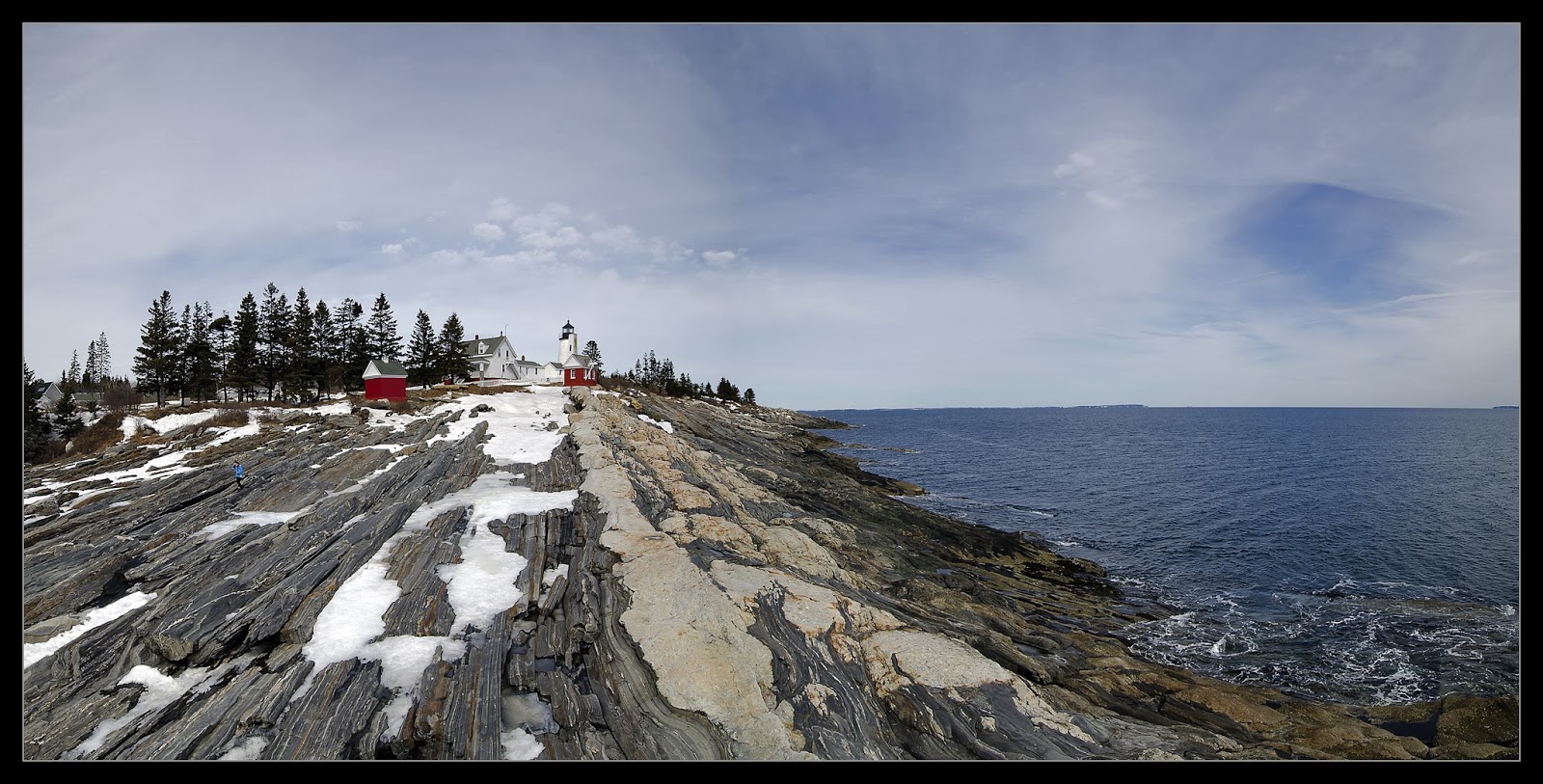 ... several times i reminded her about staying warm, until i finally realized how as a kid i'd so hated it when ma would tell me the same thing as she, too, forgot that my youthful metabolism was quite capable of maintaining a comfortable body temperature ... 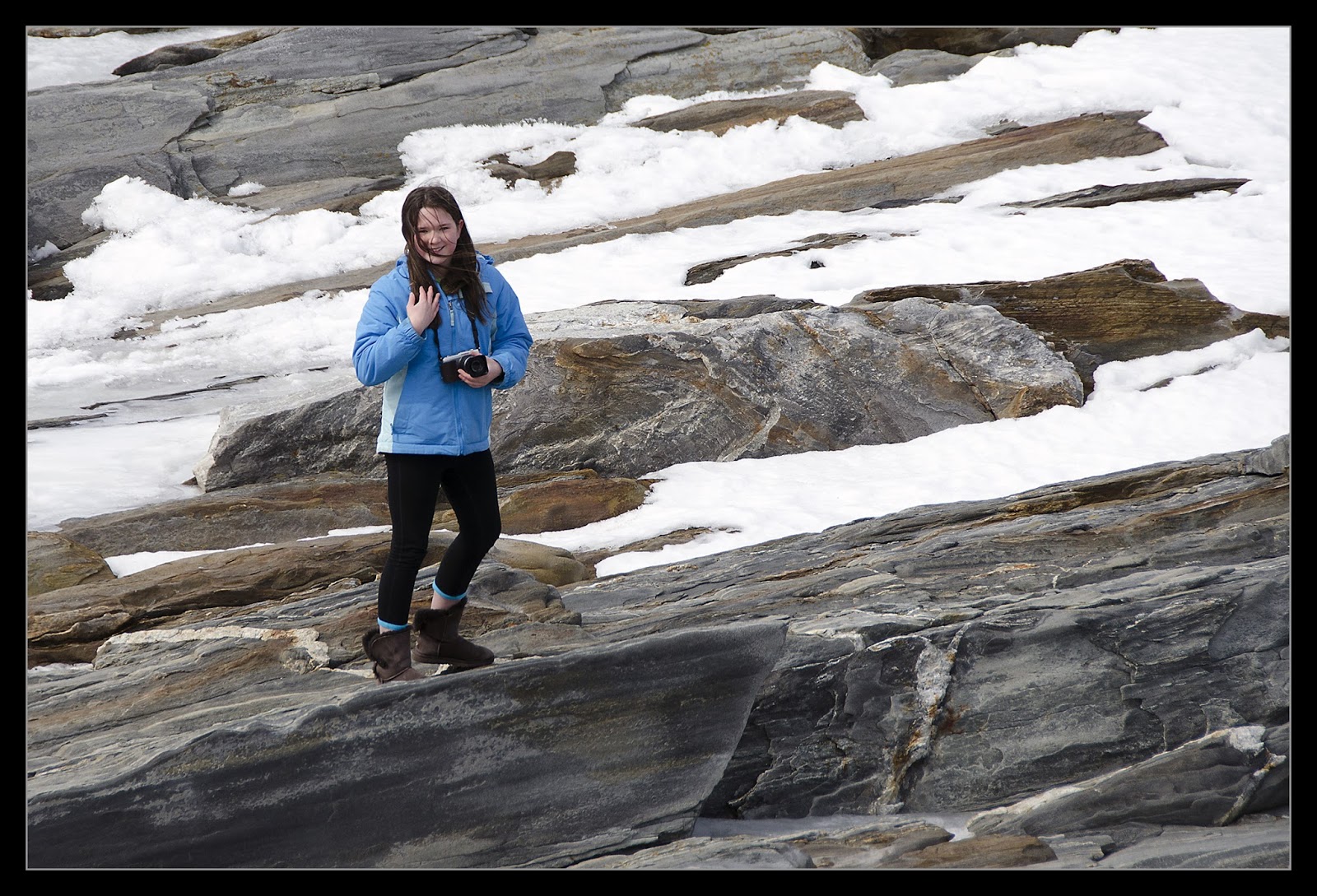 ... the tide being quite low, i think the result of a recent rare alignment of moon and sun, we explored the excellent vantage point that is usually submerged beneath the crashing surf line ... 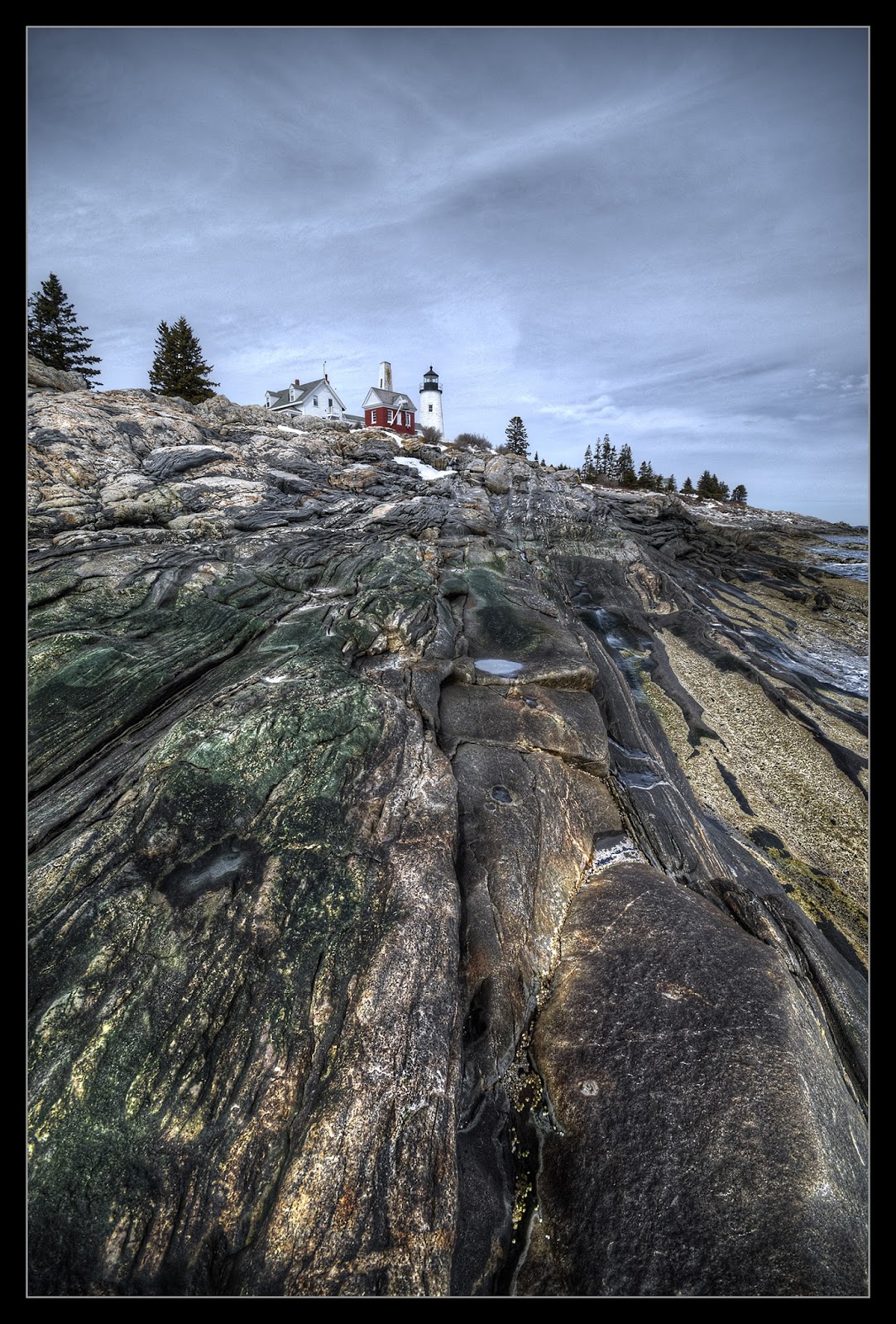 ... and, still not quite old enough to know better, for a most dramatic view of the lighthouse i scrambled atop the huge pegmatite outcropping that forms the point of the peninsula ... 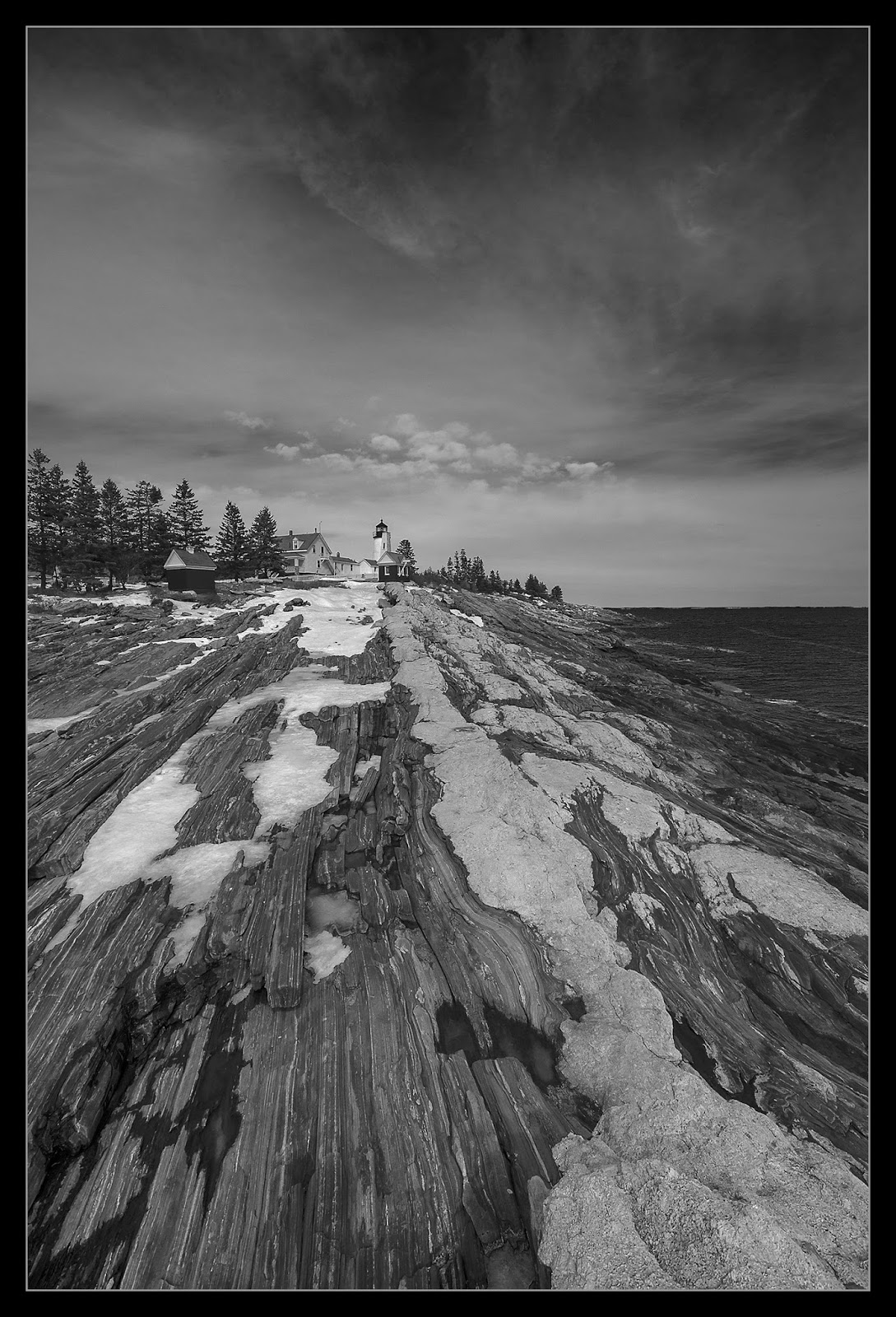 ... father and daughter posed for a quick snapshot ... 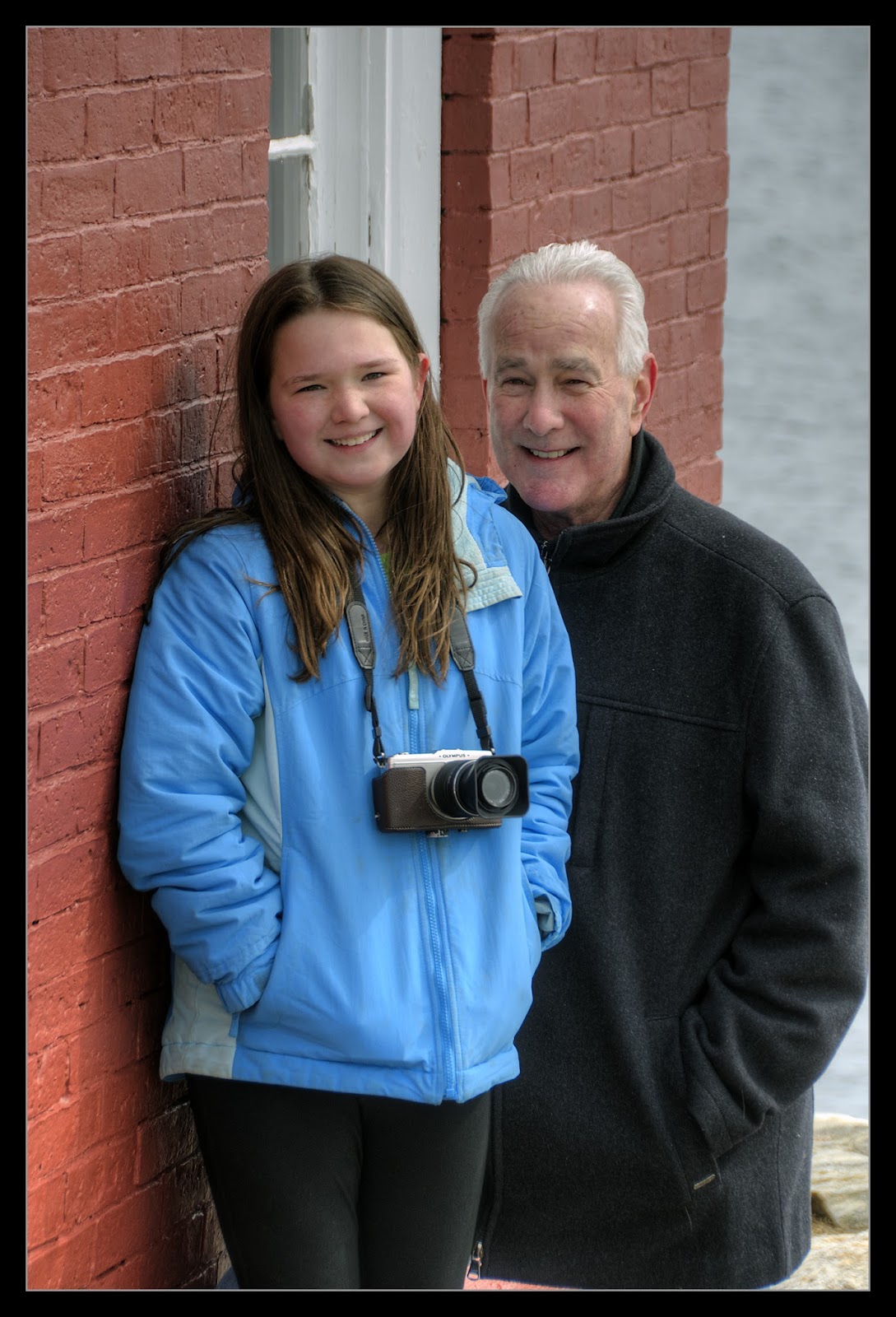 ... still in the no-flatlanders-clogging-up-the-streets time of year, we decided to stop in darmiscotta for some hot tea and delicious ice cream ... eric, who doesn't like having his picture taken, afforded me the honor of one of his "GQ" face making sessions ... this was my favorite ... 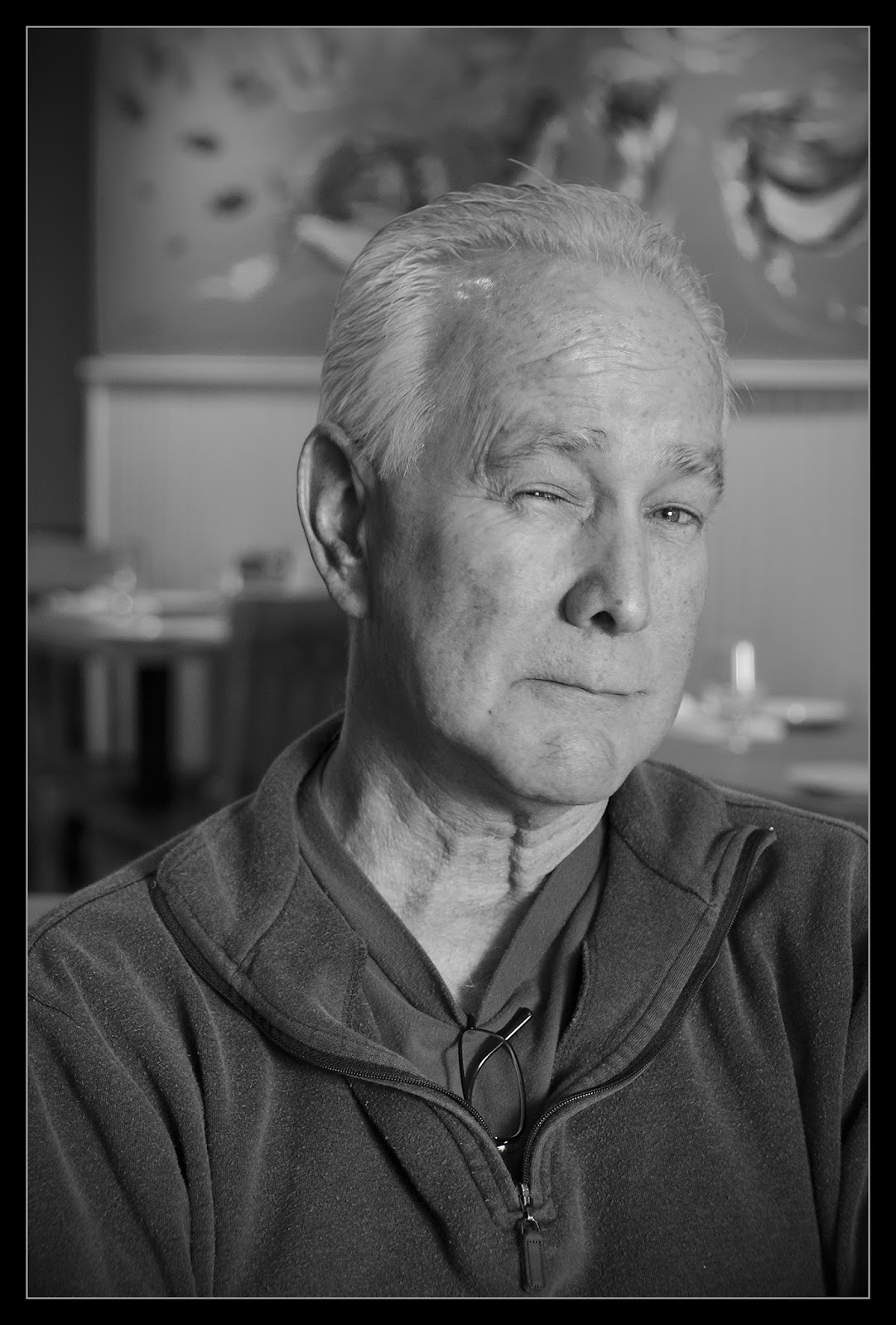 ... with all kidding aside, i'm honored that eric trusts me to the point that he'll relax and let me capture a nice (and more "normal") portrait of him ... 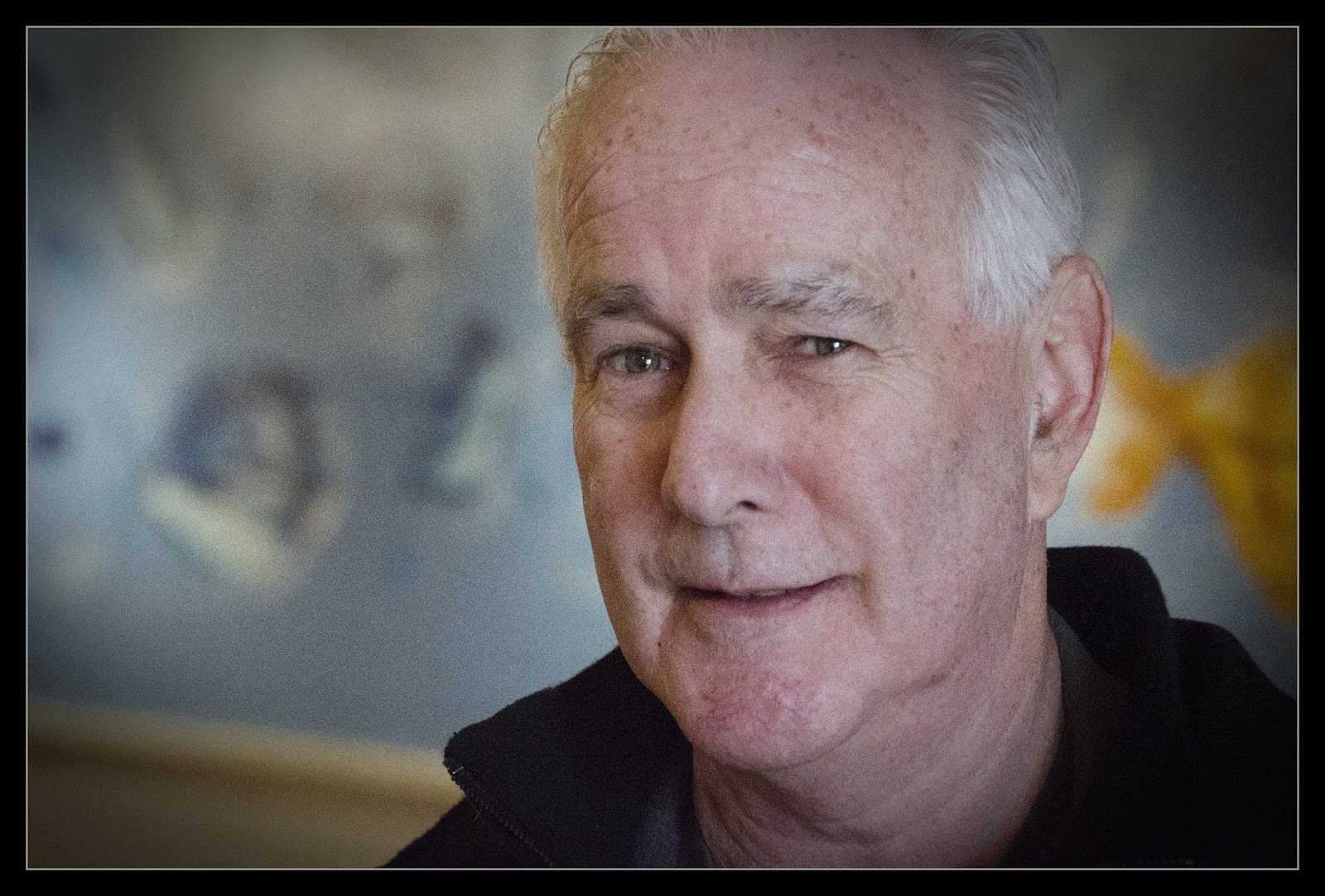 ... we had a great time, and we're all looking forward to our next outing, the wire bridge in north new portland ... i so believe that addie is going to be a great photographer (always a teacher, that's me) ...

... roger came over for a bit of help with his studying for a motorcycle instructor's license ... i snapped a picture of him as he agonized a "correct answer" that didn't jive with his rather extensive riding experience ... 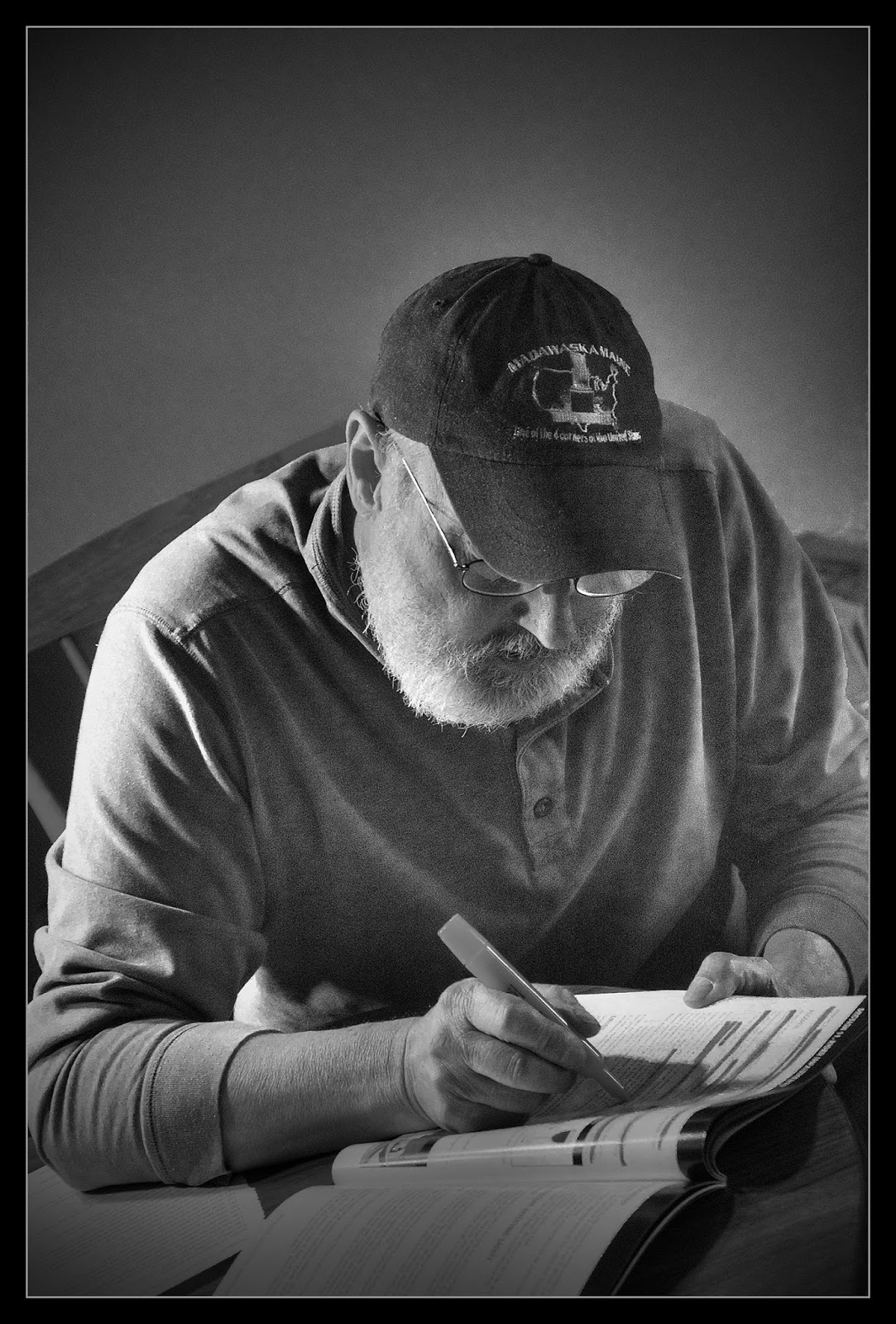 ... of all the styles of photography, this is my favorite ...