... using a maine gazetteer and his own built-in inertial guidance system, john perfectly navigated us over fifteen miles of unpaved roads through the woods to the narrow isthmus connecting mount kineo to the mainland ... just a good rock throw out from the swing is one of the deepest spots of any body of water in maine, a darkly submerged ravine over 200 feet beneath the choppy surface of moosehead lake ... this swing—a most perfect swing, i will add—is one of those special "1% places" ... 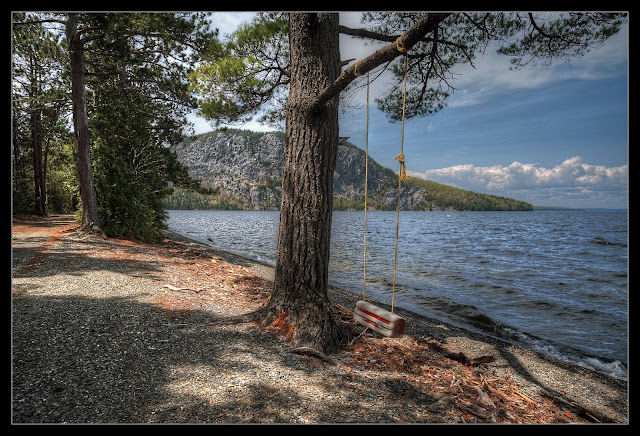 ... the beach ridge is almost a quarter-mile of these smooth skipping stones ... on this side of the peninsula the wind creates waves which make such activity difficult, but only thirty-forty feet away on the south side the water is mill pond smooth ... if my brother and i had been brought here as kids we probably would've never left ... 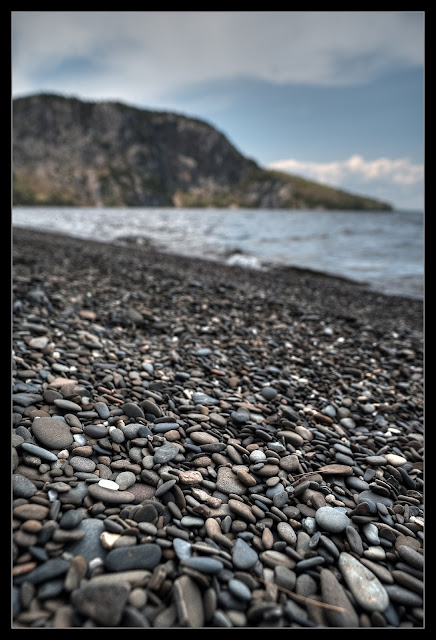 ... mount kineo is a mystical place ... millions of years in the past some sort of volcanic activity pushed this huge mass of metamorphic and sedimentary rocks above the surface of the earth, only 17,000 years ago mile-high glaciers carved the mountain into its present shape ... 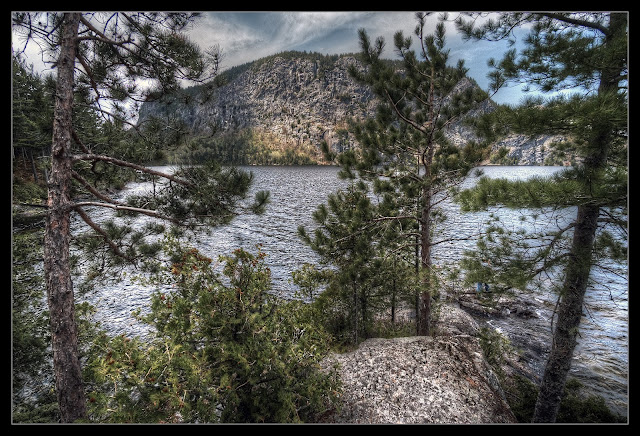 ... john ponders a picture above a shore line that would have been most familiar to the paleo-indians who first inhabited this place ... they discovered that mount kineo was a source (north america's most extensive, it turns out) of flint-like "kineo rhyolite, a hard smooth-grained stone that is ideal for producing sharp knives, cutters, axes, and arrow and spearheads ... this material was so prized that tools made of it are found all along the eastern seaboard and as far inland as the ohio river valley, proof that thousands of years before the first europeans arrived here there was a well developed trading network connecting much of north america ... 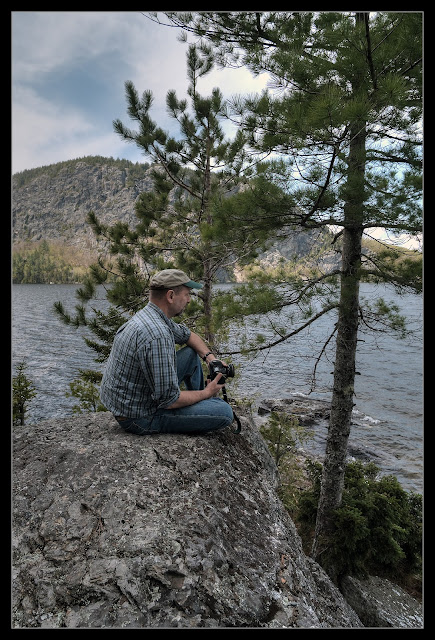 ... always, in time, even the hardest of rocks surrenders to life ... 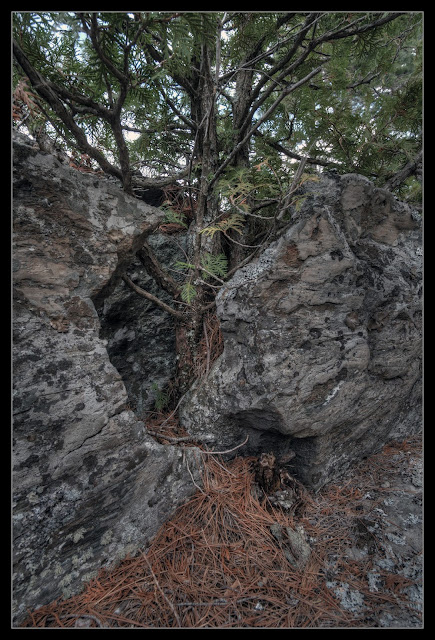 ... thanks to john, another "i've always wanted to go there" places checked off what is a rather long list ... after a few minutes standing on this little rocky point i decided it's now one of my favorite spots in the world ... 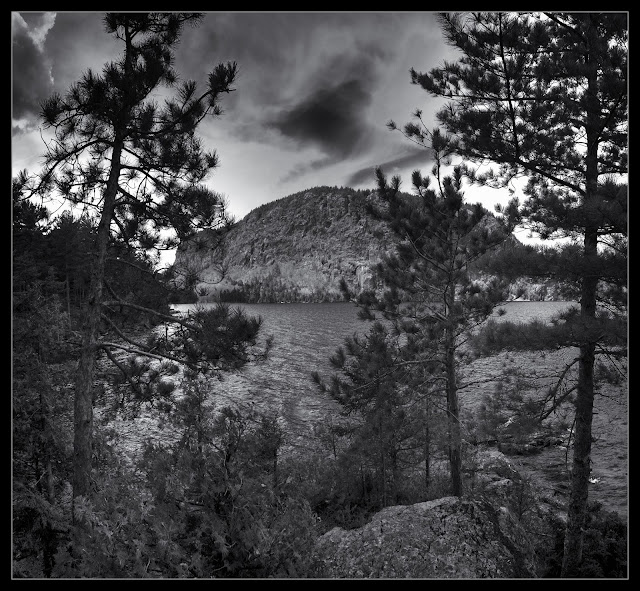 ... from one of the greens of the little nine-hole golf course we watched a family of geese ...

... i had seen this fellow on the way in, as we were driving out several hours later he was still browsing away in the swamp alongside the tote road ... we pulled over and did a little out-the-window picture taking ... 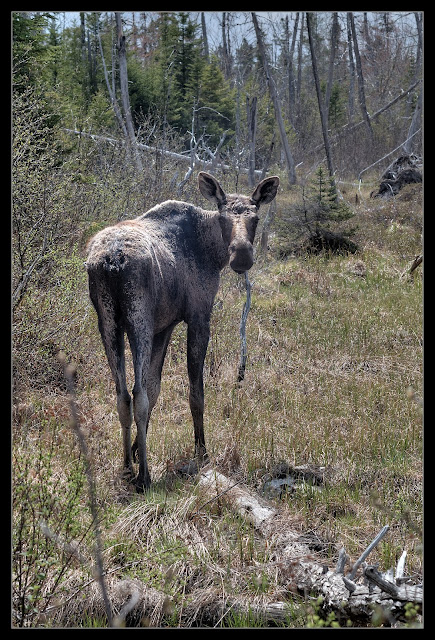 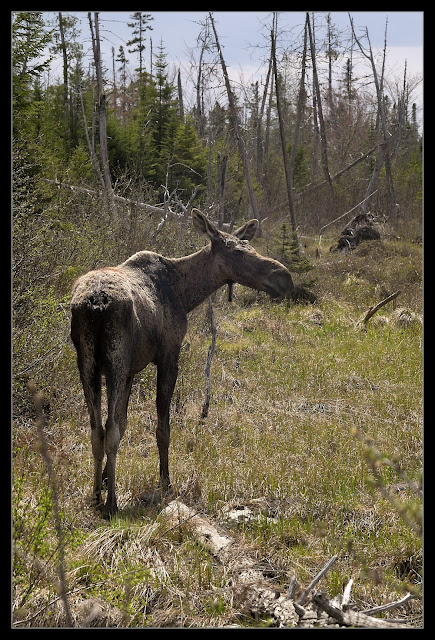 ... we ended our moosehead wanderabout with a nice late-lunch in greenville ... as we drove away i snapped a picture of the lake steamer "katahdin," which is over one-hundred years old and still going strong ... i've wonderful memories of the time i brought liz, adrien, sarah, and jon for an afternoon cruise on moosehead lake, a summer outing i highly recommend ... 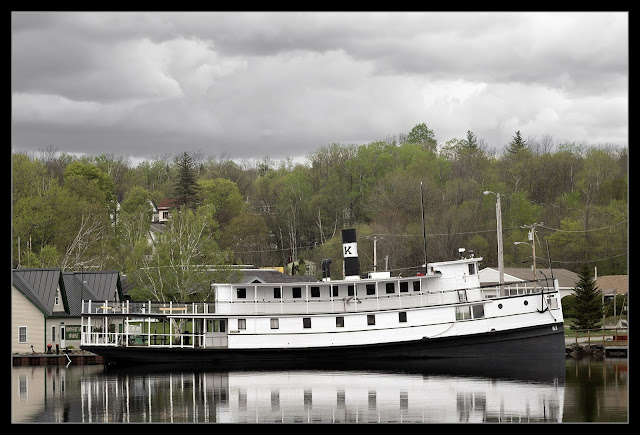 ... for our little wanderabout we entered an area of maine for which special reverence is felt by both those who call it home and others who visit ... john posed in front of the restored sign he leaned against as a small child ... 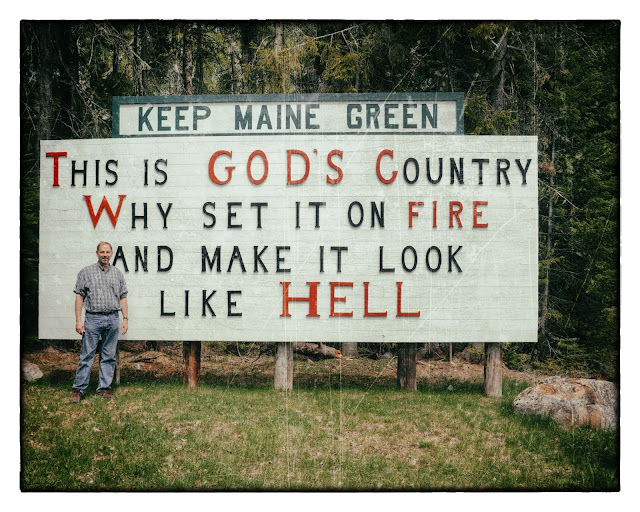 ... john parked the car and we hiked up to visit the site where in january of 1963 a huge usaf b-52c crashed into the side of elephant mountain ... we lived in bellevue, nebraska, at the time, home to the headquarters of the strategic air command ... i remember pa coming home very late one evening from where he worked deep underground in an atomic bomb proof command bunker ... "we lost one of the bombers" ... i was too young to understand that it wasn't the wrecking of the aircraft that had so upset him ... 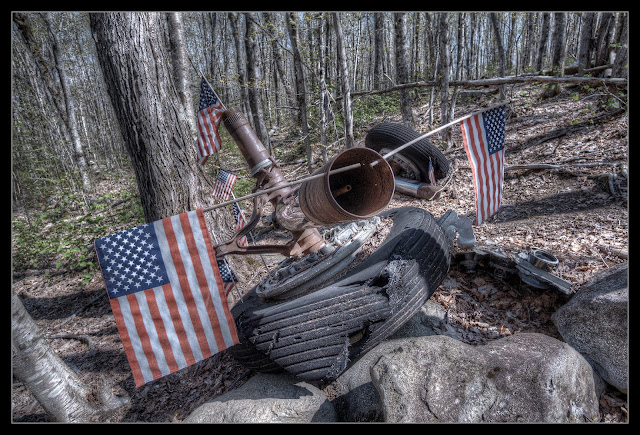 ... i worked on these airplanes, or, at least, the similar "high-tail" d/g-models and the final greatly improved "fat belly" h-models, so it was easy for me to discern that the air force (and, perhaps, salvagers and scavengers), had hauled off 85-95% of the airframe, avionics, and engines ... this was the only immediately recognizable portion of the plane, the tail gunner's compartment ... sergeant michael o'keefe would have been the first to know the plane was doomed since he clearly would have felt and heard as the massive vertical stabilizer just above his head ripped away from the airplane ... his escape protocol would have been to detach the weapons system from the aircraft, then slide his seat forward and fall away to the rear ... however, he, along with six others, died in the accident ... examining this tangled wreckage, i wondered if he had time to at least try save himself ... i like to think that at the very end his final thought was that he had some chance to survive ... 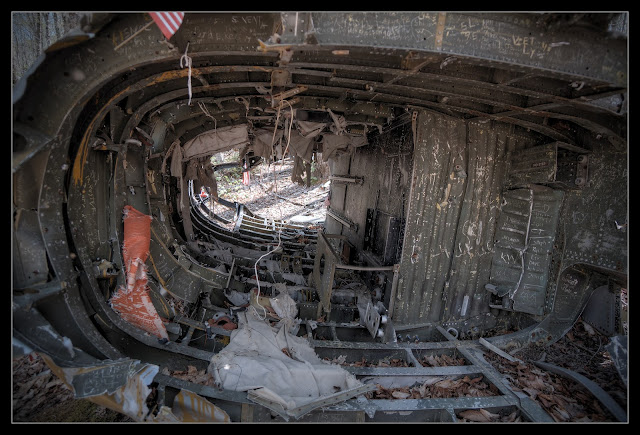 ... there are tiny pieces of the b-52 scattered all over the forest floor ... 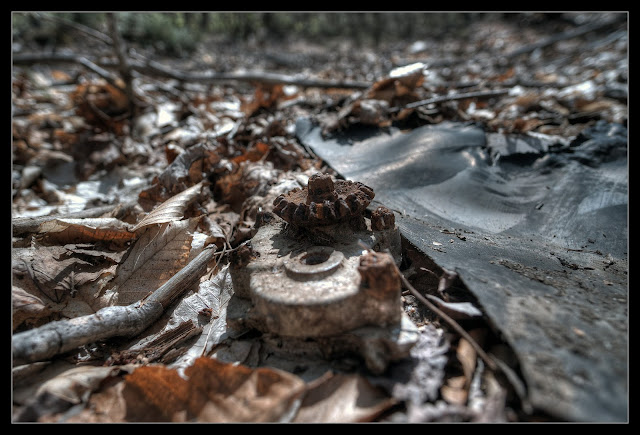 ... as i said, i worked with these aircraft, and, growing up in the strategic air command, it's distinctly likely that this particular plane at one time or another thundered over my head as my buddies and myself enjoyed a summer afternoon reclining in the long grass next to the overrun of the miles-long military airstrip ... that gives me a special understanding of these pieces of torturously twisted and torn metal ... sad as they are, in them i can see the fullness of the mighty aircraft of which they were but individual components ... john, perhaps, was a bit overwhelmed ... "how—how can something great and powerful and mighty be so reduced to these pathetic bits and pieces" ... 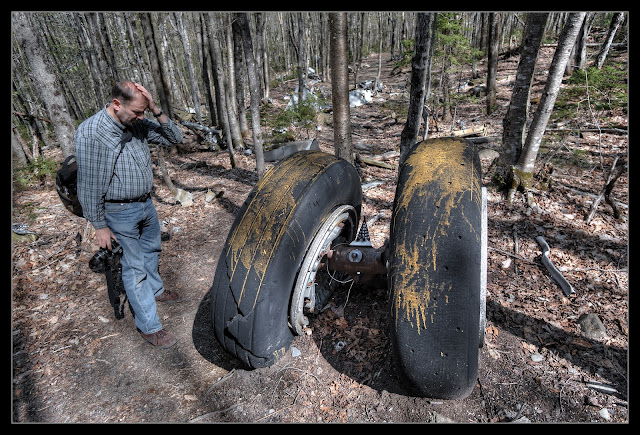 ... in one of his nautical narratives nicolas monsarrat wrote, "man can never win against the sea, the best he can do is hope to break even" ... on that winter day in 1963 these men climbed into their aircraft knowing that doing so moved fate's counter another tick ... words so overused today, i cannot say if they were either brave or heroic ... however, having grown up with their like, lived with them, and served with them, i do know that they put themselves in harm's way out of principle, and that, i believe, should be remembered ... 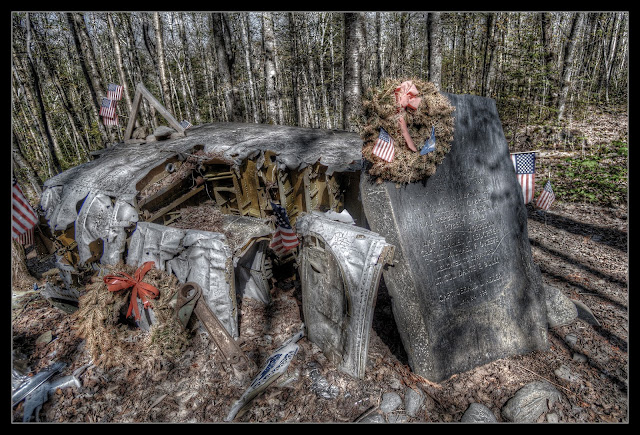 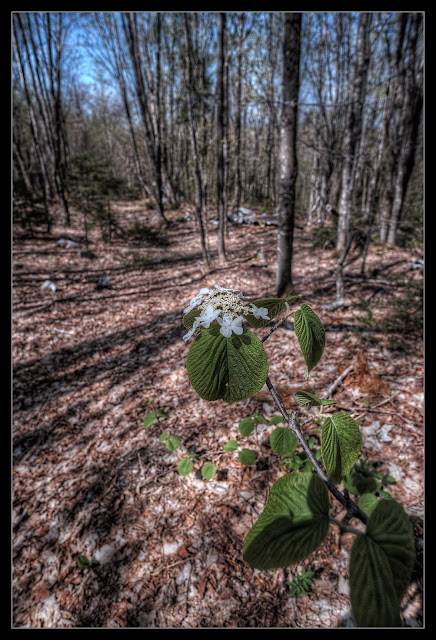 In Flanders fields the poppies blow
Between the crosses, row on row,
That mark our place; and in the sky
The larks, still bravely singing, fly
Scarce heard amid the guns below.

We are the Dead. Short days ago
We lived, felt dawn, saw sunset glow,
Loved and were loved, and now we lie
In Flanders fields.

Take up our quarrel with the foe:
To you from failing hands we throw
The torch; be yours to hold it high.
If ye break faith with us who die
We shall not sleep, though poppies grow
In Flanders fields.
LT. COL. JOHN McCRAE
Newer Posts Older Posts Home
Subscribe to: Posts (Atom)